Kohler’s disease is a rare condition in which the tarsal navicular bone (a bone in the arch of the foot) becomes inflamed. This bone disease is named after the German radiologist who described the condition in the early twentieth century.

Kohler’s disease usually affects children between the ages of three and five. It occurs more commonly in boys than in girls, and is often unilateral, affecting one foot. It is described as an avascular necrosis, or osteonecrosis, in which bone tissue deteriorates due to an interruption of blood supply.

Bone affected by avascular necrosis can break into tiny fragments before healing and hardening.  As a result, the foot becomes swollen and painful, and the arch of the foot is tender. 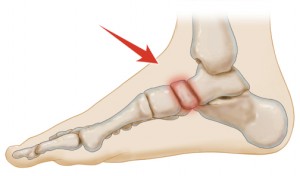 How Did I Develop Kohler’s Disease?

What causes avascular necrosis of the navicular bone is unclear, but a delayed ossification, or hardening of bone, may be partially responsible. Skeletal growth and maturation in children is a process that takes place over time, up until about 15 to 17 years of age.

In a child who is developing normally, the navicular bone is the last tarsal bone to ossify (harden). As the child gains weight, there is more pressure on the bones of the foot, and a not fully ossified navicular bone can become compressed between adjacent bones—namely the talus and cuneiforms.

Compression of the navicular bone’s blood vessels may result in the avascular necrosis of Kohler’s disease.

A case of bilateral Kohler’s disease in identical twin brothers who had simultaneous onset and parallel clinical course has been reported (Clinical Orthopaedics and Related Research, 2003).

The authors suggest that the development of the condition in identical twins may imply that there is an unknown genetic predilection for the disease.

Kohler’s Disease Symptoms To Be Aware Of

Symptoms of Kohler’s disease are usually mild and may include:

The pain may be intermittent and may worsen after activity. Children may refuse to put weight on the foot. The arch of the foot may be tender to the touch. Some children may have foot swelling accompanied by warmth and redness.

These symptoms are sometimes mistaken for signs of infection, and Kohler’s disease is often misdiagnosed for this reason. The disease can also be asymptomatic, and may be discovered incidentally during radiographic examination of the foot for another reason.

How is Kohler’s Disease Diagnosed?

A child with Kohler’s disease may present similarly to a child with a foot injury. An examination will reveal pain and tenderness over the dorsomedial midfoot, with or without local skin changes.

Affected children typically walk with a limp or antalgic gait, with weight bearing on the lateral side of the foot. Other examination findings are normal. Children with Kohler’s disease are otherwise healthy.

The diagnosis can be confirmed with radiologic tests, such as a simple radiograph that shows a collapsed, flat, and radiodense navicular bone. Radiologic findings may show patchy areas of navicular bone with increased density, which represents sclerosis (hardening of tissue), and rarefaction (thinning of bony tissue) with loss of normal trabecular pattern.

What Are My Treatment Options for Kohler’s Disease?

The child with Kohler’s disease may be treated with a short course of non-steroidal anti-inflammatory drugs (NSAIDs) for pain control and with soft arch supports or medial heel wedge.

Children with worse symptoms, such as pain with activities, may benefit from wearing a walking plaster cast (well molded under the length of the arch of the foot) for four to six weeks. Symptoms tend to last longer in untreated children than in treated children (fifteen months versus three months).

The type of treatment does not alter the radiographic course of the disease or the final result. Kohler’s disease can be managed by your child’s primary care physician. Referral to an orthopedist or orthopedic specialist is usually unwarranted, but may be considered if symptoms persist.

A child with persistent pain requires further evaluation for other conditions, such as talar coalition. Surgery is not indicated for this disease.

What Is the Prognosis for Kohler’s Disease?

Kohler’s disease is self-limiting, meaning that it usually resolves on its own, without any long-term consequences. In children who are treated with rest and NSAIDs, and who avoid putting excessive weight on the affected foot, the disease rarely lasts more than two years. Almost all patients eventually recover excellent function.

Talking to Your Doctor About Kohler’s Disease

Here are a few questions you may want to ask your child’s pediatrician: