Tarsal coalition is an uncommon, congenital condition of the tarsal bones in the foot. It’s estimated that anywhere from 1 to 3 percent of the population have this condition, which is typically diagnosed in children and adolescents.

In tarsal coalition, two or more bones in the heel or the midfoot do not separate properly during fetal development, which can lead to a painful, flat foot. In about half of all cases, both feet are affected. 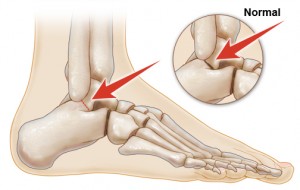 What Is Tarsal Coalition?

Tarsal coalition affects the bones in the midfoot and heel, which are called the tarsal bones. There are several different forms of tarsal coalition.

Any of the seven tarsal bones could be affected, but the calcaneus, navicular, and talus bones are the ones most commonly involved. In some cases, more than one type of tarsal coalition may be present in the same foot.

Who Is At Risk For Tarsal Coalition?

Tarsal coalition is congenital, meaning that children are born with it. While it does seem to run in families, no gene has been identified that is associated with the condition. It is believed that tarsal coalition is a result of a mutation during fetal development, so there is no way to prevent it.

What Are The Symptoms Of Tarsal Coalition?

The pain typically appears in the area of the fibula, on the outside of the foot where the ankle meets the foot. Pain may also be felt on the top of the foot, and some people experience muscle spams.

In some instances, especially in some cases of talonavicular coalitions, there may not be any symptoms at all. Symptoms may be more pronounced if the tarsal coalition has ossified (i.e., new bone growth has appeared).

How Is Tarsal Coalition Diagnosed?

Patients may first seek treatment when they have pain or stiffness in the affected foot. In some cases, symptoms are precipitated by a recent weight gain, a new athletic activity, or an injury. In adolescents, tarsal coalition is sometimes discovered because their bones are ossifying.

The new rigidity may bring on pain and stiffness in the foot, prompting an investigation.

How Is Tarsal Coalition Treated?

The success of either type of surgery is usually monitored with follow-up x-ray or MRI imaging.

What Are The Complications Of Tarsal Coalition

In some cases, a tarsal coalition is treated with rest and orthotics, and symptoms never recur. Sometimes an untreated tarsal coalition may advance, causing pain and becoming too significant for surgical excision. Furthermore, other joints may become involved and become arthritic from overuse. In these cases, fusion surgery may be used to relieve symptoms.

Children who experience pain from tarsal coalition may seek to avoid physical activity that causes them pain. They may also experience more injuries, such as ankle sprains, and may suffer from degenerative joint disease of nearby joints. A tarsal coalition will not affect the growth pattern of a child or adolescent.