Understanding the Anatomy of Your Ankle Ligaments

Ligaments are bands of tough fibrous connective tissue that connect bones to bones and form joints. There are several ligaments in the ankle joint that provide stability and assist the up and down movement of the foot.

These ligaments, though strong, are susceptible to injuries such as ankle sprains. In fact, a sprained ankle is the result of a torn ankle ligament. Ligaments and tendons are  similar. The difference between them is that ligaments connect bones to bones, while tendons connect muscles to bones.

The three ligaments that make up the lateral side are:

The Anterior talofibular: This ligament is located in the front (anterior) and passes from the fibular to the front of the talus bone. It is also referred to as ATFL.

The Posterior talofibular: This ligament passes from the back of the lateral malleolus (the outside surface of fibula) to the rear surface of the talus. It is also referred to as the PTFL.

The Calcaneofibular: This ligament connects the fibula to the calcaneus (heel bone). 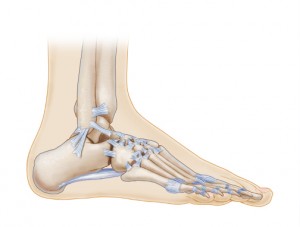 The medial collateral ligament, also referred to as the deltoid ligament, consists of three ligaments:

Tibionavicular: This ligament runs between the tibia and the navicular bone of the foot.

Tibiocalcaneal: This ligament runs just under the skin from the tibia to the sustentaculum tali (which is a projection of the calcaneus or heel bone).

The Greek letter ‘delta’ is shaped like a triangle, and the medial collateral ligaments are in a triangular shape—hence the term deltoid. The deltoid is the strongest ligament, but like the other ligaments, it is commonly injured.

The tibiocalcaneal and tibionavicular ligaments prevent the ankle from moving away from the central axis of the body, while the anterior and posterior tibiotalar ligaments limit the plantarflexion (down) and dorsiflexion (up) movements.

They all work together to support the ankle joint during movements of eversion (when the foot is turned out to the side).