Understanding The Metatarsal Bones Of The Foot

They are connected to the forefoot and hindfoot by muscles, and by the plantar fascia ligament. The metatarsals are not named individually. Instead, they are numbered first (the big toe) through fifth (the pinky).

Each metatarsal has a long shaft with two expanded ends called the base and the head. Here is a quick description of each of the metatarsal bones: 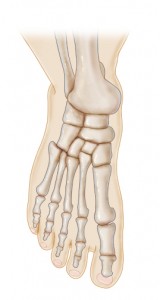 To learn more about the cuboid, cuneiform and additional bones, please read our article on bones of the foot.

What are the Metatarsals’ Roles?

The metatarsal bones are extremely strong and durable, and they play a major role in how our feet function. First, they act as shock absorbers for the heel, ankle, and toes. Second, the metatarsals help to create two of the three arches located in our feet.

The first three metatarsals, combined with the calcaneus (heel bone), the talus (ankle bone), the navicular, and the cuneiforms make up the medial longitudinal arch.

The fourth and fifth metatarsals, combined with the calcaneus and cuboid, make up the lateral longitudinal arch, which is lower and flatter than the medial arch. The metatarsals provide stability while standing.

The metatarsal bones are our body’s shock absorbers. Because of this, they are also very susceptible to injuries, especially during sports-related activities, or as our bodies slow down with age. The most common injuries to the metatarsals are acute fractures and stress fractures.

Acute fractures are usually caused by a sudden, violent impact, such as when a heavy object falls on the foot. Stress fractures happen over time, and are usually the result of repetitive movements.

The second, third, and fourth metatarsals suffer stress fractures more than the first and fifth bones, but all are prone to acute fractures.