Cuboid syndrome, also sometimes called cuboid subluxation or lateral plantar neuritis, is a common type of foot injury, particularly in athletes. Even though it is common, it is often misdiagnosed and subsequently treated improperly.

Cuboid syndrome occurs when there is an injury or dislocation on the lateral side of the foot, the outer side with the small toe. The injury is in the area of a small tarsal bone in the foot, the cuboid bone.

The cuboid bone is located roughly at the midpoint of the outer side of the foot, and together with the other tarsal bones, it forms the arch of the foot. Other structures that may be involved in the injury include the calcaneocuboid joint and the surrounding ligaments.

Typically it is athletes who develop cuboid syndrome, either after an injury, or as lateral foot pain that appears without a noticeable injury. Athletes presenting with cuboid syndrome are often runners or ballet dancers, and one study showed that as many as 80 percent of cuboid syndrome patients also have pronated feet (flat feet).

Cuboid syndrome is often associated with repetitive movement of the foot, such that which occurs during running or dancing.

The muscle that is believed to be associated with cuboid syndrome is the peroneus longus muscle, a muscle located on the outside of the lower leg and is responsible for stabilizing the midfoot. Continual or repetitive movement of this muscle may result in a malalignment of the cuboid bone.

Another possible cause of cuboid syndrome is an injury, such as a sprained ankle. An ankle sprain in which the foot turns inward (called an inversion ankle sprain) may damage the ligaments connected to the cuboid bone.

This type of ankle injury can happen to almost any athlete, but is common with basketball, football, and soccer players. 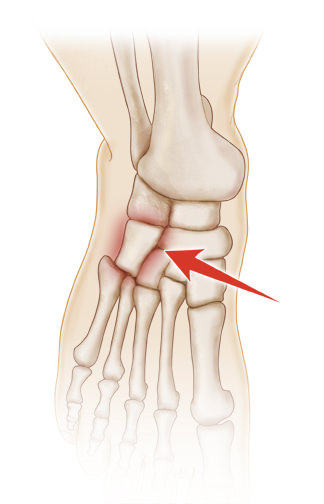 Signs and Symptoms of Cuboid Syndrome To Watch For

Cuboid syndrome may cause pain, particularly in the lateral midfoot, especially when walking. There may also be redness or swelling, and patients may avoid putting weight on the affected foot.

If the cuboid syndrome is associated with an ankle injury, there may also be pain, swelling, redness, and restricted movement in the ankle.

How Is Cuboid Syndrome Diagnosed?

After taking into account the patient’s participation in sports or physical activities, a podiatrist may conduct a physical exam and order imaging studies.

Cuboid syndrome can be difficult to diagnose — and may be misdiagnosed — partially because it is not well understood, but also because there are often no physical findings on an x-ray, CT scan, or MRI.

Even if cuboid syndrome is initially suspected, imaging studies may still be done to rule out any other causes of foot pain.

During a physical exam, a podiatrist may look for certain signs that point to a possible diagnosis of cuboid syndrome:

Pain: The lateral midfoot is tender, and palpating the area may be painful for the patient. There may also be redness in the area (erythema) and slight swelling. Patients may also experience pain when hopping on the affected foot, or may even be unable to hop.

Decrease in motion: Patients with cuboid syndrome may find inversion ankle movement to be painful, and may resist or avoid these movements.

Uneven gait: Patients with cuboid syndrome may exhibit an antalgic gait — i.e., they seek to avoid putting weight on the affected foot. Pain during walking may occur as the foot pushes off the floor.

There is no one specific test that can be conducted to accurately diagnose cuboid syndrome, but there are maneuvers described by physical therapists that may aid in diagnosis.

Midtarsal adduction test: While stabilizing the ankle joint with the right hand, the healthcare provider uses their left hand to hold the foot around the midpoint. The foot is then moved inward, in the direction of the other foot. This movement compresses the patient’s calcaneocuboid joint and may cause the symptoms of cuboid syndrome.

Midtarsal supination test: In this test, the ankle joint are again stabilized while the foot is manipulated in roughly a half-circle (this is also called triplane motion). This motion will also cause the pain of cuboid syndrome.

How Is Cuboid Syndrome Treated?

Treatment of cuboid syndrome involves manipulation of the cuboid. In cases in which cuboid syndrome was secondary to an ankle injury, treatment may be postponed until the ankle has healed sufficiently.

If there is redness, swelling, or a hematoma present on the foot, those conditions should also be adequately resolved before manipulation of the cuboid is attempted.

Treatment of cuboid syndrome may be done by a qualified clinician such as a podiatrist, physiotherapist, or physical therapist.

There are two forms of therapy for the treatment of cuboid syndrome, the cuboid whip and the cuboid squeeze.

Cuboid whip: This movement is often done while the patient is lying down on their stomach. The patient’s leg is held in a 70 to 90 degree angle at the knee, while the ankle is kept in line with the lower leg and the foot.

The therapist places their hands around the affected foot, with fingers interlaced over the top of the foot, and the thumbs over the cuboid bone on the bottom of the foot.

The thumbs are then used to apply force to the bone, which may result in a “pop” that is heard or felt as the calcaneocuboid joint is pushed back into position. Some practitioners may massage the foot after this maneuver.

Cuboid squeeze: In this movement, the clinician holds the foot in a similar manner as in the cuboid whip, with the thumbs on the bottom of the foot at the cuboid bone.

The clinician then bends the foot at the ankle joint, moving the foot away from the body (similar to pointing the toe). With the soft tissues in the top of the foot relaxed, pressure, or a “squeeze,” is applied to the cuboid bone.

Some studies suggest that the cuboid squeeze is more effective in treating cuboid syndrome, but for those who have an ankle injury, this movement may be too painful.

After manipulating the cuboid bone, the clinician may further manage the patient’s discomfort with massage, cryotherapy (ice), non-thermal ultrasound, or electrical stimulation. In some cases, manipulation may need to repeated.

Other treatments may be used to prevent the injury from recurring or to provide relief from any lingering symptoms after manipulation.

Padding and taping: Supporting the cuboid bone with padding or a wedge may help prevent recurrence. Taping may also be used to support and stabilize the bones of the midfoot.

Exercise: The clinician treating the cuboid syndrome may prescribe some exercises that can help with symptoms and prevent the injury from occurring again. These exercises could include stretching the ankle up and down or in and out for a number of repetitions several times a day.

Orthotics: Because many people who develop cuboid syndrome also overpronate, orthotics may be useful in preventing recurrence. Orthotics are worn inside the shoe to promote the proper alignment of the foot. Orthotics are available commercially, but may also be custom made.

Remember: Cuboid syndrome is a common but poorly understood foot injury that is often misdiagnosed. Once the condition has been diagnosed properly, treatment involves manipulation of the cuboid bone by a qualified clinician. Other supportive therapies may be used for pain management and prevention of recurrence.