Everything You Need to Know About a Lisfranc Injury

A Lisfranc injury occurs when one or more of the metatarsal bones are displaced from the tarsus, which is a cluster of bones at the top of the foot, just below the ankle joint.

It is named for Jacques Lisfranc de St. Martin (1790–1847), the French surgeon who first described it while serving in Napoleon’s army in 1815. Lisfranc noticed that soldiers tended to injure themselves in a specific way when they fell after improperly dismounting from their horses.

Although it can sometimes involve broken bones in the foot, a Lisfranc injury is primarily an injury to the ligaments of the midfoot, which can rupture when excessive force is applied to the region, resulting in a dislocation of the midfoot.

It is most likely to happen to a football player when he is balanced on the ball of his foot, ready to pivot (a position known as plantarflexion), and another player lands on his heel. The stance adopted by catchers in baseball places them at some risk as well.

Besides football games, car crashes and industrial accidents are also common causes of this type of injury.

A Lisfranc injury can occur when something heavy falls on the foot, or when a car runs over it, or when someone lands on his or her foot after falling from a great height. It can also happen when someone falls from a horse while one foot remains trapped in the stirrup, as happened to many of the soldiers observed by Dr. Lisfranc himself.

Similarly, Lisfranc injuries are sometimes seen in windsurfers and snowboarders, whose boards feature bindings designed to keep them from falling off; these bindings pass over the metatarsal bones and can sometimes trap the foot when the surfer falls from his board. 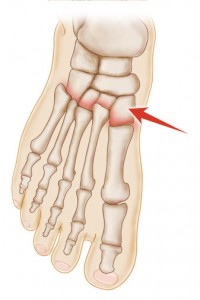 How Are Lisfranc Injuries Diagnosed?

Lisfranc injuries are sometimes misdiagnosed as midfoot sprains because they can be difficult to see on an x-ray, but an experienced podiatrist should be able to identify this type of injury correctly in most cases.

As with a sprain, there is apt to be pain, swelling, and possibly bruising on the top of the foot. A person who has suffered a Lisfranc injury may find that he is unable to put weight on the affected foot.

If you find, after using the RICE method (Rest, Ice, Compression, and Elevation) to treat what appears to be a sprain, that it does not feel any better after a few days, you should make an appointment to see a podiatrist as soon as possible.

It is important that you not wait too long; an undiagnosed Lisfranc injury that goes too long without treatment can lead to complications, including joint degeneration or compartment syndrome, a condition caused by bleeding or swelling within the “compartments” of muscle tissue in your foot.

Compartment syndrome can cause severe muscle and nerve damage.

First, your doctor will check for bruising on the bottom of the foot, which might indicate either that the midfoot ligaments are severely torn or that the bones of the midfoot are fractured. The he or she will examine you by holding your heel steady and rotating your foot.

The doctor will also check to see how you respond to gentle pressure applied to your midfoot (if it hurts, that’s a bad sign), and give your toes the “piano key test,” moving them up and down to see if the motion produces pain.

If the x-rays do not show anything conclusive, the doctor may want to take an x-ray of the uninjured foot for comparison, and possibly a CT scan or MRI as well.

How Are Lisfranc Injuries Treated?

The treatment necessary for a Lisfranc injury depends largely on its severity. Less severe injuries, in which no bones have been forced out of position, may be treatable without surgery—possibly with a cast and some kind of arch support.

The patient will have to wear a cast for about six weeks, during which time no weight can be placed on the injured foot. Le’Veon Bell of the Pittsburgh Steelers sustained a Lisfranc injury in August of 2013, and he was back in action by the end of that September.

On the other hand there are cases like that of the Cleveland Browns’ Errict Rhett, who suffered a Lisfranc injury in 2000 and never played again.

For more severe injuries, surgery is often necessary. Surgical screws are sometimes used to hold the bones in place while the ligaments heal, which usually takes several months. Arthritis can develop in these cases, and athletic activities may have to be curtailed after that.

How Can I Prevent A Lisfranc Injury?

Lisfranc injuries are difficult to prevent, but the risk can be minimized by exercising caution and by wearing shoes that are appropriate to whatever activity you are engaged in.

The prevalence of this type of injury in football has motivated the NFL to look into the mechanics of how it occurs, and to try to find out whether players’ shoes are too lightweight, or whether their cleats grip the turf too tightly, providing traction at the expense of safety.