Lax ligaments, or ligament laxity, may occur anywhere in the body and can be a major cause of chronic pain. Loose ligaments — a condition sometimes referred to as being “double jointed” — may be confined to the feet, but more often the condition is present in all joints.

When this condition affects joints over the entire body, it is called generalized joint hypermobility. Young people with this condition may lose some of their hyper-laxity as they age, but people over the age of 40 often have recurrent joint problems and almost always have chronic pain. 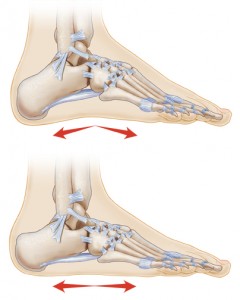 Why Do I Have Lax Ligaments?

Ligament laxity may be genetic and affect an individual from a very early age. Joint hypermobility may be a feature of several genetic disorders, including Marfan syndrome, Ehlers-Danlos syndrome, and Down’s syndrome.

Joint injuries often damage ligaments as well, either by stretching them abnormally or by tearing them.

An injured ligament that does not heal properly, even after the application of RICE (Rest, Ice, Compression, and Elevation), may be loose or lax. Lax ligaments are not capable of supporting joints as effectively as healthy ones.

Thus, affected persons may be prone to further injury, and may compensate for the weakness by overusing other parts of their bodies.

Lax Ligaments Symptoms To Look For

People with extremely lax (or hypermobile) joints can bend their elbows or knees past a position of neutrality. They can also easily place their hands flat on the floor while bending forward from the waist. The ability to touch the thumb to the forearm is also common.

People with lax ligaments may not have any pain or other symptom, but foot and ankle problems may develop as a result of lax ligaments, and these conditions can cause pain. Such conditions include:

How Are Lax Ligaments Diagnosed?

Your doctor will assess ligament/joint laxity by measuring range of motion. A simple test for loose ligaments is to see how far your index finger bends backwards. If you can bend it backward 90 degrees without discomfort, you have loose ligaments.

A score of 5 or more is considered positive, but you may still have joint laxity if the test is negative.

If your doctor suspects one of these conditions, you may be referred for further evaluation with an echocardiogram, ophthalmologic examination, or other type of testing.

How Are Lax Ligaments Treated?

Because lax ligaments themselves often do not cause pain, they generally do not require treatment.

However, if you have musculoskeletal problems caused by lax ligaments or hypermobility, your doctor will probably suggest conventional medical treatments, which include physiotherapy and pain medicines. Strength training of muscles may also be recommended.

People who suffer from hereditary joint laxity are advised to avoid joint hyperextension, impact activity, and resistance exercise to minimize the risk of subluxation and dislocation.

Myofascial release (with heat, massage, or other means) may provide some pain relief. A lifelong program of low-resistance muscle toning, gradually increasing repetitions and frequency of exercise, helps stabilize loose joints and may minimize future pain and/or delay the onset of arthritis.

Flexible flatfoot is not a benign condition, and it often results in osteoarthritis and long-term disability.

Orthotic therapy can help stabilize the foot and ankle to reduce injuries and prevent irreversible damage to joints. Heel cord stretching can reduce any tightness in the calf and lower limb muscles.

If you have painful flexible flatfoot, your doctor will first determine the anatomical cause of the pain. In some cases, surgery may be indicated, but it is not recommended in patients with joint hypermobility, such as those with Marfan syndrome, Ehlers-Danlos syndrome, or Down’s syndrome.

For an ankle sprain or ligament injury, early treatment involves RICE to prevent and resolve any associated swelling.

When the swelling and pain have subsided, further examination will reveal which ligaments are affected and how severe the injury is. Surgical repair of lax ligaments will generally be considered, although in most cases conservative measures are attempted first.