Muscle Contusion of The Foot – What You Can Do

A muscle contusion (more commonly known as a bruise) occurs as a result of a blunt force injury that damages blood vessels—usually capillaries—causing blood to seep into the surrounding tissue, which in turn causes the bruise to spread and darken.

Medically speaking, a visible bruise is a type of hematoma—that is, a collection of blood outside the blood vessels, which in some cases may form a lump under the skin.

Bruises can appear in any type of tissue, even bone, and a bruised foot muscle is a common injury, especially among physically active people such as athletes and small children.

Generally speaking, small bruises are nothing to be concerned about, and in most cases they will go away on their own without treatment within two or three weeks.

If a bruise is large enough or severe enough, however, it may be a sign of a serious internal injury, and even mild bruising can be cause for concern for people who suffer from conditions such as hemophilia, which can interfere with blood clotting. 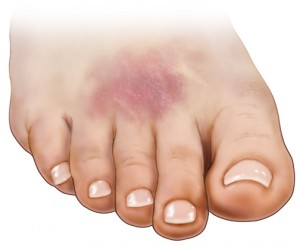 Symptoms of a Bruised Foot Muscle to Pay Attention To

Not all bruises are visible black-and-blue marks. The discoloration most of us associate with bruising happens when blood leaks from damaged blood vessels, but it is possible for muscle fibers and other tissue to be damaged without internal blood leakage occurring.

Depending on the nature of the injury, symptoms of a bruised foot muscle may include:

Foot contusions are most likely to happen to athletes, who are often so focused on the game they are playing that they do not even realize they have been injured until much later.

Bruising of the foot muscle may occur in the course of a fall, for example, and the athlete may just get right back up and resume play.

People who play hockey or basketball are especially prone to this type of injury due to the sudden turns they must frequently make, and hockey players may also be struck accidentally by one another’s sticks or skates.

Children also have a tendency to bruise their foot muscles in the course of rough play, and their inherent clumsiness makes them especially vulnerable.

When to See Your Doctor About Your Bruised Foot Muscle

While most contusions heal on their own within a few weeks, often without causing any inconvenience to the sufferer, there are times when a bruised foot requires immediate medical attention.

If you suffer from hemophilia or any other condition that interferes with blood clotting, or if you are on blood thinning medication, you are probably well aware of the potential seriousness of even a minor bruise.

If you are an athlete, you need to be able to distinguish a minor bruise—which you will of course inevitably suffer from time to time—from a more serious injury that may affect your ability to play for years to come.

You must also consider the possibility that the injury that bruised your foot muscle may also have fractured a bone.

Possible complications of a foot muscle contusion may include:

How Do I Treat A Bruised Foot Muscle?

If the injury is not too severe, the most effective treatment may be simple RICE—Rest, Ice, Compression, and Elevation. Ice should be applied to any suspected bruising injury as soon as possible, and the foot should be kept elevated.

Compression can be applied with bandages, although you should take care not to bandage your foot so tightly as to cut off circulation.

Your doctor will most likely prescribe non-steroidal anti-inflammatory drugs (NSAIDS). Refrain from massaging the injury or rubbing it excessively, and take whatever medication your doctor prescribes.

If a large hematoma appears and does not go away within a few days, your doctor may want to drain it surgically.

How Can I Prevent A Bruised Foot Muscle?

The best way to prevent this type of injury is to be careful. If you are involved in a sport that presents a significant risk of contusions, always be sure to keep your head in the game—don’t be careless. Wear whatever protective gear is permitted by the rules and encouraged by experienced players.

Bruises cannot always be prevented. If you are an athlete, you accept this as part of the game. If you have recently become the parent of a small child, you will need to resign yourself to eighteen years of occasional cuts, scrapes, bruises, and sometimes even broken bones.

Either way, it is helpful to remember that injuries can build character if they are not too serious.

Talking to Your Doctor

Here are some questions to ask your doctor about your bruised foot muscle:

A Complete Guide To The Muscles In Your Foot