Home » A Guide For Your Foot Skin Problems & Conditions » Gangrene

Gangrene of the Foot and Toes — Symptoms, Diagnosis, and Treatment

Gangrene is the death of skin and other tissues from a lack of blood flow, and it is caused by severe bacterial infection, injury, or chronic disease. This potentially life-threatening condition most commonly affects the toes, fingers, and limbs.

In rare instances, it involves the muscles and internal organs. Although a characteristic feature of gangrene is greenish-black skin, the term “gangrene” comes from the Greek and Latin words for gnaw, which is another way to describe the tissue loss.

Chronic diseases that can harm the circulatory system and lead to gangrene include diabetes mellitus, peripheral vascular disease, and Raynaud’s disease. Various serious injuries may stop blood flow and cause gangrene — for instance, a severe case of frostbite. Gangrene is treated surgically, which may involve the removal of dead tissue (debridement), or in the worst cases, amputation.

What Causes Gangrene of the Foot?

There are three major types of gangrene that can involve the foot:

Dry gangrene: In dry gangrene, the tissue slowly dies (this process is also called necrosis) when one or more arteries become obstructed. The skin appears dry, shriveled, and purplish-black. This type of gangrene happens most often in persons with advanced blockages of the arteries (atherosclerosis) resulting from diabetes.

Wet gangrene: In wet or moist gangrene, a sudden stop in blood flow to an area caused by trauma, such as a crushing injury, allows bacteria to multiply quickly without interference from the body’s immune system.

Other traumatic causes of gangrene include compound fractures, burns, and animal bites. Gangrene can also occur after certain medical procedures, such as subcutaneous injections and surgery, particularly in persons with diabetes mellitus or other chronic disease. The skin often appears swollen, blistered, and wet. This type of gangrene progresses rapidly and can be fatal.

Gas gangrene: Gas gangrene is a type of wet gangrene commonly caused by infection in an injury or medical wound. The species of bacteria most often responsible for the infection, Clostridium, produce gasses and poisonous toxins as they grow in tissue.

Other bacteria known to cause wet gangrene include Streptococcus and Staphylococcus. The skin may appear normal initially, as deeper muscle tissue may be affected first. As the infection progresses the skin turns pale, gray, or purplish-red and bubbly.

What Are the Risk Factors for Gangrene of the Foot?

Foot gangrene more commonly develops in older people and in those with diabetes or vascular disease—conditions that can interrupt the blood flow to an area of your body.

According to one study, “The most common symptom of peripheral vascular disease is muscle pain in the lower limbs on exercise. In diabetes, pain perception may be blunted by the presence of peripheral neuropathy.

Therefore, a patient with diabetes and peripheral vascular disease is more likely to present with an ischemic ulcer or gangrene than a patient without diabetes” (Foot [Edinburgh, Scotland], 2010).

If you are obese or are in a state of immunosuppression from cancer treatment or infection, your risk of gangrene developing as a result of a wound is higher.

Severe injury and surgery can also put you at risk for gangrene in that damaged skin and tissue can affect blood flow to the injured area. People taking anticoagulant medication, alone or in combination with heparin, have an increased risk of gangrene, although gangrene occurring as a result of drug therapy is very rare. 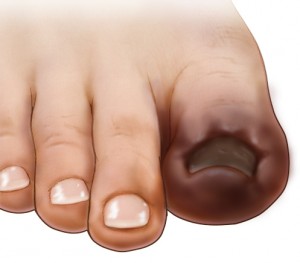 Symptoms of Gangrene of the Foot to Pay Attention To

Symptoms of foot gangrene vary depending on the location and cause of the gangrene. Pain and swelling may be localized to the toe, foot, or the entire leg, or it may be generalized, involving the whole body. Gangrene in a wound is often characterized by:

How Is Gangrene of the Foot or Toes Diagnosed?

Your medical history is an important part of an evaluation for a foot wound or ulcer. In patients with diabetes, gangrene can start with a small bruise on the foot. Any factor that can exacerbate the wound, even improper self-treatment, can lead to gangrene.

Your doctor will ask you about past or current trauma, surgery, cancer, and chronic disease. He or she will perform a complete physical examination and look for any underlying conditions. The foot will be examined to determine the extent of tissue damage and the viability of surrounding tissues.

Your doctor will order blood tests to check for infection and other laboratory tests to identify the organism(s) causing the infection.

These tests may include culture of drainage from a wound or tissue sample obtained through surgical exploration. The culture or sample will be stained with Gram stain and viewed under a microscope.

The results will help your doctor determine which antibiotic(s) will be most effective. If you have wet or gas gangrene, your test results will probably show few, if any, white blood cells and the presence of purple (Gram-positive), rod-shaped bacteria.

Radiographs of the foot may also be taken, especially if you have diabetes. In patients with diabetic foot ulcers, it is important to test for the presence of osteomyelitis and gas in the soft tissues.

How Is Gangrene of the Foot Treated?

Gangrene of the foot a medical emergency. The type of treatment administered will depend on whether the wound can heal and how impaired the blood supply to the area is.

Although tissues damaged by gangrene cannot be saved, steps can be taken to prevent the further progression of the gangrene. This often requires a combination of medical and surgical intervention.

For instance, if you have wet or gas gangrene, your treatment will consist of intravenous antibiotic therapy and debridement of dead tissue, which can prevent the spread of infection to healthy tissue.

A skin graft using the patient’s own skin to repair missing or damaged skin can be done only if an adequate blood supply has been restored to the affected area.

Amputation of a toe or foot becomes necessary when your doctor determines that the affected tissues will not heal and the blood supply to the area is too impaired to allow for transplantation of healthy tissue. If the gangrene is widespread, the entire lower limb below the knee may need to be amputated.

If you have gas gangrene, you may benefit from hyperbaric oxygen therapy. During this procedure, you are placed in a special pressurized chamber that administers oxygen at high pressures, forcing more oxygen into the affected area. This can speed healing and help kill bacteria.

Vascular surgery may be recommended for patients with gangrene caused by poor blood flow. This may involve bypass surgery to repair a blocked artery in order to increase circulation.

A Guide For Your Foot Skin Problems & Conditions