If you suffer from brittle nails, you’re not alone. Experts believe that up to 20 percent of the US population suffers from onychorrhexis (the medical term for brittle toenails or fingernails).

Brittle nails can cause considerable misery for people who suffer from them; the split ends that look like they’ve been gnawed by a hungry animal are bad enough, but the ridges are the icing on a very unattractive cake.

Women who try to grow their nails to any length generally find that the nail breaks—unevenly—as soon as it gets more than a millimeter past the end of the toe or finger.

While weakness of the nails can take many forms—split nails, crumbling nails, etc. —the term onychorrhexis refers to a specific condition that is characterized by splitting and by the formation of longitudinal (lengthwise) ridges on the surface of the nail.

This condition can have many causes, and in some cases, doctors are unable to determine the exact reason for a patient’s brittle toenails, and must settle for diagnosing the condition as idiopathic—medical jargon for “who knows?” 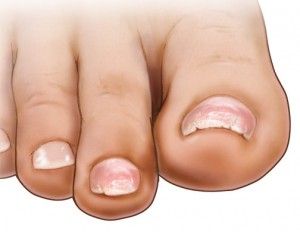 Why Are My Toenails Brittle?

Brittle, easily broken toenails have a variety of possible causes. There is often not one single cause, but rather a number of factors working together. Possible causes of onychorrhexis include:

One frustrating aspect of the brittle nail problem is that it can be the result of too little moisture—or too much. Swimming coaches, lifeguards, and others who spend a lot of time in the water often report brittle nails, which are often directly attributable to their occupations.

On the other hand, the damage that occurs to the fingernails of someone who works with chemicals all day is generally caused by dehydration of the nail.

Also, as noted above, the reason our nails become increasingly fragile and brittle as we get older is that our bodies lose some of their ability to retain moisture as we age.

How Are Brittle Nails Treated?

The B complex vitamin biotin has been demonstrated to strengthen weak, brittle nails. Over-the-counter biotin supplements such as Appearex can be found in most chain drugstores. Studies appear to show that 2.5 milligrams of biotin daily will improve nail strength.

Since a nail takes about six months to replace itself, it may take at least that long for the benefits of biotin supplements to become apparent, but 25–30 percent of people who try biotin see improvement within four to six months.

Another product that shows promise in the treatment of brittle nails is Genadur. Unlike biotin supplements, Genadur is available only with a prescription.

The significance of this product is that it is the first treatment for fragile, brittle nails that has been approved by the FDA.

According to Genadur’s manufacturer, Medimetriks Pharmaceuticals, a once-daily brush-on application may produce results within two or three weeks.

Unproven Treatments for Brittle Toenails You Should Know About

The following products and supplements have all been touted at one time or another, and they all have one thing in common: none of them have ever been clinically proved to work.

That’s not to say for sure that none of the items on this list will help, but the studies that have been conducted to date have been inadequate, and in some cases have been funded by companies involved in marketing them as miracle cures for brittle nails. When more research is needed, the consumer should always be skeptical.

Talking to Your Doctor About Brittle Nails

Here are some questions to ask your doctor if you suffer from brittle toenails:

Your Guide For Toenail Problems & Conditions of Toenails