Claw toe, which is also sometimes called claw foot, typically affects the four smaller toes. The toes bend in such a way as to resemble a claw. While the angle of the toes may make them painful, in some cases there is no pain.

Most often claw toes are treated conservatively, with proper footwear and exercise. Extreme or painful cases of claw toe may be treated with surgery.

The most defining sign of a claw toe or a claw foot is the abnormal position of the toes. A claw toe is so named because the toe bends at the second knuckle (the middle/proximal phalanx joint) and the first knuckle (distal interphalangeal).

The toe is bent in such a way that it may actually curl under itself. The overall impression, due to the position of the toe, is that of an inflexible “claw.” 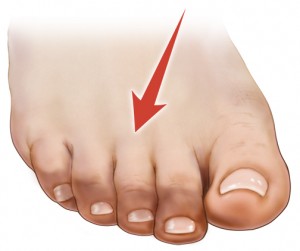 Claw toes may also cause toe pain, but in some cases there is actually no pain. The toes sometimes develop a callus from the knuckle rubbing against the top of the shoe or from friction on the ball of the foot.

Claw toe and hammertoe are often confused, but they affect different muscles in the foot. A hammertoe bends at the second knuckle, which similar to a claw toe. But in a hammertoe, the first knuckle does not bend under the foot.

The second toe is usually affected by a hammertoe. Another difference is that claw toes often affect several toes at once, with the big toe being spared, while a hammertoe can affect just one toe.

There may be no underlying cause, but claw toe sometimes occurs after an injury to the ankle, surgery on the ankle, nerve damage, or inflammation.

Wearing shoes that don’t fit properly is also a common cause of claw toes. Claw toes can also be associated with certain chronic or acute conditions.

Claw toes can occur when the muscles in the toes become tight due to being confined in shoes that do not have enough space in the toe box.

The higher the heel and the smaller the toe box, the more cramped the toes become. The tendons can actually shorten, which makes straightening out the toes more difficult.

Conditions that are often associated with claw foot are:

Alcoholism: Nerve damage from alcoholism can weaken the muscles in the foot, which can result in claw toes or other deformities.

Diabetes: Foot problems are common in people who have diabetes. Claw toe, in particular, is associated with foot ulceration. Foot ulcers in patients with diabetes can lead to complications such as infection.

Cerebral palsy: This disorder, largely considered to be congenital, affects muscle tone. When the muscles in the foot are affected, claw toes and other foot problems can be the result.

Charcot-Marie-Tooth disease: This type of inherited muscular dystrophy, also known as Charcot foot, results in muscle and nerve damage and can cause various foot problems, including claw toes.

Rheumatoid or osteoarthritis: Ligaments that are weakened by arthritis inflammation can lead to foot problems such as claw toes.

Spinal cord disease: Any problem with the spinal cord, such as a tumor, can cause the nerves in the foot to be affected and result in claw toes.

Polio: This viral disease is no longer common in developed countries, but still continues to be a problem in the developing world. Polio is potentially deadly, and can attack the spinal cord, causing foot deformities.

Stroke: A stroke can cause imbalances in the foot, resulting in claw toes.

What Are The Complications Of Claw Toes?

Claw toes are not usually not dangerous by themselves, but they can cause other complications, such as corns.

Calluses (also known as corns): Claw toes can force the foot into a position that causes the shoe to put pressure on the other structures of the foot. This may cause calluses or corns to form, especially on the ball of the foot or the knuckle.

Other common places for corns are between the toes and at the distal end of the toes. Treating the underlying claw toe can help prevent or resolve calluses.

What Are The Treatment Options For Claw Toes?

Prompt treatment of claw foot is necessary to prevent permanent bending of the toes and associated conditions such as corns. When claw toes first become evident, they may be flexible, and can still be straightened.

Orthotic devices such as toe crests can be worn under the toes to keep them straight while in shoes. Hammertoe splints can also be placed over the toes to hold them in place and correct or prevent bending. Treatments for claw toes that can be done at home include:

Claw toes are not necessarily harmful in and of themselves, but if the toe bend is permanent and/or painful, surgery may be desired.

Surgery may be performed on the shortened tendon, in order to lengthen or reposition it in order to facilitate the straightening of the toes. In other cases, steel pins may be inserted into the toe, forcing it to straighten.

How Can Claw Toes Be Prevented?

Some cases of claw toes are a result of improperly fitted shoes. It is recommended to wear shoes that fit properly, do not constrict the toes, and have a low heel. Claw toes from other causes can sometimes be prevented by treating the underlying condition.

People with diabetes, especially, should have a healthcare professional examine their feet on a regular basis. Any corns that may develop could require treatment to avoid the development of foot ulcers.

If you suspect that you could be developing a claw toe or some other foot deformity, such as a hammertoe, see a podiatrist or qualified healthcare professional for evaluation of your feet.