The term Overlapping Toes refers to a condition in which one of the toes turns inward and lies on top of an adjacent toe. The smallest (fifth) toe is the one most commonly affected, but in some cases the condition can affect the second toe.

The condition is sometimes known as clinodactyly, but this is a broad term that also refers to curled toes, as well as to a number of similar conditions affecting the hands and fingers.

Some form of clinodactyly affects either the fingers or the toes of an estimated 10 percent of the population, although in many cases the condition may not be serious enough to warrant medical intervention.

In less medically enlightened times, overlapping toes were thought to be a sign that a child might have Down’s syndrome, and some superstitious people used to consider the condition an evil omen, while others considered it good luck. 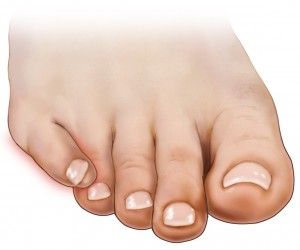 Why Do My Toes Overlap?

The causes of overlapping toes are not well understood. The condition is congenital, and some researchers have suggested that the position of the fetus in the womb may somehow be the cause.

It is more likely, however, that heredity plays a part, as the condition has been observed to run in families; when children and infants have overlapping toes, it is usually the case that one or both parents have the same condition.

Toe deformities are not uncommon among infants and very small children. Like most toe deformities, overlapping toes are present at the time of birth, and if left untreated they can become worse over time.

It is very rare (although not unheard of) for children to outgrow overlapping toes on their own.

As with most toe deformities, overlapping toes are not a problem that causes pain or other symptoms in infants and very small children.

In fact, in most cases the appearance of overlapping toes does not indicate a medical condition at all, and the toes will straighten out as the child becomes a little older and begins to learn to walk.

Problems can arise, however, as a child grows older and flexible foot deformities become rigid deformities. In most cases, the child will eventually begin to experience pain and difficulty walking.

Overlapping toes is a condition that primarily affects children. Yet, there are adults who were born with overlapping toes and never had them corrected, and many of them lead perfectly normal, healthy lives.

In fact, some of these people have even become famous — actress Jennifer Garner (who has starred in such movies as Pearl Harbor and Catch Me If You Can) has an overlapping toe on her right foot. But it didn’t stop her from winning a Golden Globe and a Screen Actor’s Guild award!

Overlapping Toes Treatment Options For You

If your child has overlapping toes, your doctor may initially attempt to treat them with conservative measures such as binding, adhesive taping, shoe modification, passive stretching, and exercise. This will usually be tried for about six to twelve weeks.

These types of treatments are rarely successful, however, and in most cases surgery will be required to correct the deformity, especially if it has had time to become rigid.

In extreme cases, it may even be necessary for the toe to be surgically amputated, but this is only a last resort. If conservative treatment is to have any hope of success, the diagnosis must be made early, so it is important that children be examined by a physician as soon as their overlapping toes are noticed.

Overlapping Toes Surgery – What to Expect

Corrective surgery for overlapping toes generally involves releasing the tendon and the soft tissues surrounding the first joint of the affected toe (the joint at the base of the toe).

Because there is contraction of the skin associated with overlapping toes, a skin plasty will also be necessary. In rare cases, it may be necessary to insert a pin to keep the toe in a fixed, straight position.

This pin will be left in place only temporarily, usually for no more than three weeks, at the end of which time it can easily be removed in a doctor’s office. In most cases, the patient will be required to wear a splint on his or her toe for two or three weeks after that.

While recovering from surgical correction of overlapping toes, it is important for the patient to stay off his or her feet as much as possible, so as not to cause movement that could undo the surgeon’s work, or cause the pin to move into a different position.

Question to Ask Your Doctor About Overlapping Toes